DONATE TO THE FUND

Last year on the anniversary of the fateful Roe v. Wade decision, my Dad — a man who deeply loved his family, church, friends, employees and complete strangers  — passed away. Henry Bomberger was the most pro-life man I’ve ever known…the most incredible man of God I’ve ever known. He was 76 years old. Here’s how he was described in his official obituary by our family:

Henry Hess Bomberger, Jr. passed away peacefully on Friday, January 22, 2021 surrounded by his wife, children and grandchildren. For twelve years, Henry battled Parkinson’s but faced it with strength and dignity. Heaven gained a beautiful soul who loved Jesus and people (especially his family) with his whole heart. Henry Bomberger was a man who embodied what it means to be a man of God. He was a devoted husband and father who adopted and loved ten children in addition to three biological children. He was loved by everyone who knew him. He modeled, so beautifully, how a husband cherishes and cares for his wife. He was a champion to children wrongly labeled “unwanted.” He was a humble hero to those who were hurting. He was proof for those who wanted to know that God is real.

Henry met the love of his life, Andrea, at a Youth for Christ event at the beach. When they married, they had no idea the journey God would take them both on via adoption. After having three biological children, they adopted ten children of various ethnicities and backgrounds. Henry chose to love those that other men abandoned, proving that color isn’t what binds us—love is. Henry was the same man at home as he was in public. His thirteen children describe him this way: loving, Godly, man of integrity, courageous, humble, funny, trustworthy, compassionate, empathetic, strong, kind, committed, honorable, thankful, joyful, caring, selfless, hard-working, playful, generous, patient, faithful, hopeful, best dad ever.

Henry earned a BS in Business/Economics at Elizabethtown College. He was a fourth generation co-owner of Bomberger’s Store in Lititz (originally in Elm). His employees loved and respected him. He would never ask them to do a task that he wouldn’t do himself. He’d sweep, make the coffee, shovel snow, wax the floors…whatever needed to be done, he showed that he was not above any of it. He was a servant leader. He was a Board Member of Susquehanna Bank in Lititz. Henry was a deeply involved member of his church, Newport Dove. His generosity and kindness were well-known. He was beloved throughout the surrounding community and beyond. Some of his children would even meet people across the country who were blessed to know Henry Bomberger.

Henry is survived by a loving and really large family that celebrates his memory. He was the beloved husband of Andrea (nee Boas) for 54 years. He was the devoted father to Beth, Dori, Richard, Corin, Valerie, Todd, Kinder, Ryan, Derek, Nathan, Bradley, Brenden and Brianne. 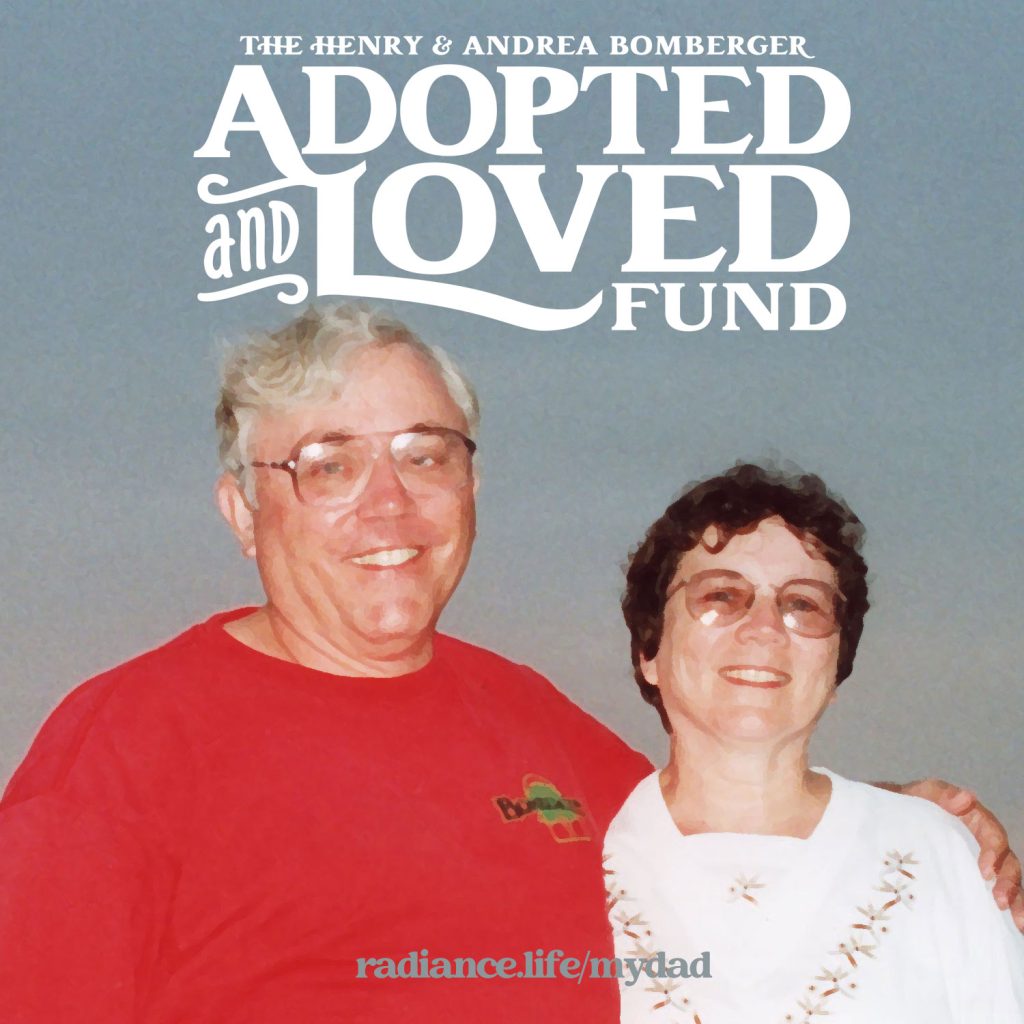 It took a team to write the purpose-driven Bomberger family storyline. My incredible Dad, my amazing mom Andrea, and the Lord — were the three-corded strand and the authors. My parents’ lives and the love with which they’ve reached the world (directly and indirectly) wouldn’t have been possible without each other. Mom was inspired at the age of 5, when she was temporarily placed in a children’s home for one year, to become a mom to those who didn’t have one. Her parents were separating due to her father’s alcoholism and other behaviors. It was a tragic experience in her life that God turned into triumph. Listen to an exclusive interview with my mom on our Life Has Purpose podcast as she shares their miraculous journey. She continues to unleash beautiful possibility in others today.

The Radiance Foundation is honored to name our new Henry & Andrea Bomberger Adopted & Loved Fund after these champions for Life, Love and  (most importantly) the Lord. Each year, Radiance will award grants to qualified Christian families looking to adopt and love vulnerable children. We will work through case workers as well as recommendations from the family and our Board to choose eligible recipients. Your tax-deductible gift to The Radiance Foundation (select Adopted And Loved Fund) helps us make the world a more loving place. 100% of what is donated goes to these grants and nothing else. Thank you!

DONATE TO THE FUND