All whites are racist.

This is the theme repeatedly affirmed in training videos produced by Bethany Christian Services. The effort was to (allegedly) teach adoptive families how to be “anti-racist.” So, the best way to teach people about the evils of racism is to be…racist. Sounds really healing.

This is part of the bizarre training from a once strongly Christian evangelical child welfare and adoption provider that now identifies as an “anti-racist” organization. “At Bethany, we’re committed to speaking out about the individual, systemic, and institutional racism in our country,” the woke agency declared in its coming out report this past Spring.

In a video entitled “Becoming An Anti-Racist Family”, an entire hour was devoted to avoiding giving any actual examples of institutional or individual racism. At one point in the training, a Bethany staff member claimed that her mixed son experienced racism at school because…wait for it…a white child told him that “conditioner is bad for your hair.” Can you feel the oppression? This is the only tangible “example” from real-life they offered in over an hour session. I’m mixed (black/white). Plenty of conditioners have messed up my scalp. I can attest to the truth of the statement, and there’s not a drop of racism in it. And with everything going on in the world today, that’s the supposed conversation between young boys that makes a mother worried about the “racist society” her brown son has to face?

The video had plenty of blame and self-denigration. It was incredibly hard for me to believe this was the organization that I once served, for years, as a chapter Board member. I don’t even recognize Bethany anymore. Numerous pregnancy centers and other similar organizations have cut ties with the leftward-hurtling organization because of its unbiblical stances.

Several years ago Bethany Christian Services quickly caved to unconstitutional LGBT attacks regarding foster care, first in Philadelphia followed by further assaults on religious freedom in Michigan. They never even put up a fight. I know, because I was part of a national #KeepKidsFirst coalition that was lobbying to protect faith-based child welfare agencies from harmful LGBT activism; Bethany wanted nothing to do with our efforts to protect…Bethany. The ACLU and Lambda Legal successfully shut down Catholic Charities’ adoption arm in several states and continues efforts to shut down more Christian adoption agencies that won’t bow to the demands of LGBT special interest groups.

Bethany, however, has made a practice of bowing. In March of this year, Bethany’s CEO Chris Palusky proudly proclaimed that the agency will now place vulnerable children in same sex homes, while “Bethany remains steadfast in its Christian faith.” So, denying the structure of family that God established, between one man and one woman in marriage, is “steadfast”?

But don’t worry. They’re happy to place children into homosexual-led homes but find placing children of my complexion in white homes as something that can be “dangerous” and violates Bethany’s newfound dogma of “equity.” They claim to support “transracial” adoption (of which I know a lot about as a brown adoptee and adoptive father) yet insist on Critical Race Theory (CRT) indoctrination that dehumanizes, categorizes, and judges us by the color of our skin. Bethany wants to train families on how to be “anti-racist” by first teaching them to be racist (see first sentence in the article) and then to look at everything through the broken filter of “race.” Everything.

The organization confirmed, through its Senior Vice President, George Tyndall, that it is “pursuing Diversity, Equity and Inclusion”, the toxic byproduct of CRT. I found it wonderfully ironic that both CEO Palusky and Senior VP Tyndall—both straight white males–heavily push the nonsense of white privilege and systemic racism but haven’t given up their roles in the agency’s leadership.

But it begs the question: What is racism? Apparently, neither Bethany nor Evangelist Kendi seem to really know. When asked to define racism, this was Kendi’s convoluted answer (see 6:47 in this video): “I would define it as a collection of racist policies that lead to racial inequity that are substantiated by racist ideas.” The audience laughed. But he was serious. Didn’t we all learn in elementary school that you can’t use a word to define itself? Oh, wait. That’s a vestige of “white privilege”—words having actual definitions and meaning that we can share is just so white.

A better question to ask is: What is race? It’s a deeply flawed human construct that is unbiblical and has, throughout history, led to discrimination, destruction and millions of deaths. We’re one human race, made from one blood (Acts 17:26), made in various beautiful colors, shapes and sizes. God didn’t send his Son to save our externalities but our eternalities. And those are internal. Christ came to rescue and redeem hearts plagued by sin that separate us from God. Kendi calls this “Savior Theology”, by the way, and that “anti-racists fundamentally reject it.”

This week, Bethany is holding a fundraiser to help fund their anti-racist journey. Jefferson Bethke, best known for his theologically challenged but emotionally compelling “Why I Hate Religion But Love Jesus” viral spoken word video, is the keynote speaker for the event. Bethke was raised by a gay mother. In his video “Sexual Healing”, he talks about having “no dad at home, so I let MTV mold me” which led him into a lifestyle of broken sexual promiscuity with girls. Yet, when asked about Christians and homosexuality in a talk show interview, he offered capitulation instead of real compassion saying nothing of the Savior’s desire to bring breakthrough to sexual (or any form of) brokenness. Loving every human being isn’t the same as loving every human doing. At the end of the interview, the evangelical social media influencer shockingly agreed with the host who said of homosexuality: “Because the religious community needs people who say, ‘that is not our fight.’” After a biblically-challenged attempt to explain how inclusive Christianity is, Bethke responded: “Like you said, that’s not our fight…my generation, I see us saying that pretty loudly.”

It’s odd considering Bethke proclaims something different in his upcoming book, Take Back Your Family: “By returning to God’s original design for families on earth, he says, we can participate in the kingdom work that restores and fulfills our innermost desires for connection, contentment, and meaning.”

What is that original design? Shouldn’t steadfast Christians know it instinctively and fight for it? Protecting Biblical marriage and vulnerable children who thrive best in that environment isn’t, according to Jefferson Bethke, his generation’s fight. And it seems, tragically, that it’s no longer Bethany Christian Services’ fight either.

Ryan Scott Bomberger
Ryan Bomberger is the Chief Creative Officer and co-founder of The Radiance Foundation. He is happily married to his best friend, Bethany, who is the Executive Director of Radiance. They are adoptive parents with four awesome kiddos. Ryan is an Emmy Award-winning creative professional, factivist, international public speaker and author of NOT EQUAL: CIVIL RIGHTS GONE WRONG. He loves illuminating that every human life has purpose.
Recent Posts 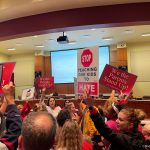