No. You Don’t Have to First Solve the World’s Other Injustices to be Pro-Life.

One cannot possibly be pro-life unless one solves all of the world’s other issues first, right? It’s an assertion about as ridiculous as insisting that Charity Water, a pro-safe-drinking-water organization, also tackle government corruption, racial inequality, access to healthcare, and every other ill that exists. Sorry, people. You can’t get a well in your village until we take care of these real injustices!

Imagine if slavery abolitionists demanded healthcare, housing, or job security as prerequisites to addressing the injustice of slavery. The evil institution would never have been abolished. I would be on an auction block somewhere in a town near you.

Sadly, our college campuses have become the new ideological plantations.

Recently, a Purdue Students for Life campaign dared to address the issue of black genocide, where more black babies are aborted than born alive, by creating their own flyer and directing their peers to our TooManyAborted.com website. Instead of exploring this Black History Month initiative, safe-space seeking college students demanded apologies and decried the “hatred”, “racism”, and “terrorism” of a flier that tied #BlackLivesMatter to abortion. Never mind, nature’s safe-space is the womb, a beautiful biological wonder that is supposed to be a sanctuary for a child—and in an ideal world—protected by both mother and father.

But to pro-abortion students on Purdue campus, their sanctuary (a learning environment they want free of opposing worldviews) has been violated and they “fear for their safety”. The real danger of abortion’s decimation in the black community gets drowned out by cries of victimization from black and white unaborted students demanding “racial justice” and “equality” for only some black lives.

In an Op-Ed in USA Today’s Journal and Courier, Fushcia Hoover (a Ph.D. candidate in the Agricultural and Biological Engineering Department) engineered her own excuses for demonizing the truth about abortion: asthma. Take a deep breath….yes, asthma. Abortion isn’t decimating the black community–asthma is. Let’s keep in mind, 218 children (of any race/ethnicity) tragically died in latest reported year according to the CDC. There were over 360,000 deliberate abortion deaths of black children in that same year.

According to the CDC 16% of black children currently have asthma, compared to 8% of white children. She suggests a causal relationship between poverty and higher rates of asthma yet ignores that poverty is only worsened by abortion. Abortion rates in the black community are up to five times higher than in the majority population. Fatherlessness is rampant, too. Nationwide, 40.6% of children are born to unmarried mothers: 35.8% among whites and an alarming 71% among blacks. Single female led homes, the tragic result of a reckless sexual revolution and a culture of abortion that encourages men to abandon their responsibilities, are five times more likely to live in poverty. They are also twice as likely to have children with asthma (13.7%) compared to married heterosexual couples (7.7%). In the end, she’s more concerned about difficulty in breathing than millions never getting to take a single breath. Hoover then goes on a statistics-free tirade of all the things that affect more black babies, including birth defects, preterm births, pregnancy complications, sudden infant death syndrome. Ironically, what she misses is that science has shown, irrefutably, that previous induced abortions are a known factor in causing birth defects, preterm births, and pregnancy complications among women—especially higher among black women because of far higher abortion rates. Numerous meta-analyses (here, here, and here) have shown the significant increase in preterm births (which cause increased birth defects like cerebral palsy), infant mortality, and pregnancy complications. One study showed for those with prior induced Dilation & Curettage (D&C) abortions, there was a 69% increase for very preterm births (<32 weeks gestation). For those with multiple prior induced D&C abortions, the increased risk expanded to 74% for preterm births less than 37 weeks gestation. Even the pro-abortion Institute of Medicine (infamous for pushing President Obama’s anti-First Amendment contraception/abortifacient HHS mandate) admits that a prior induced abortion in the first trimester is an “immutable medical risk factor associated with preterm birth”. Amazing how politics trumps science all the time. (A huge thanks to medical researcher Brent Rooney for providing the irrefutable science regarding preterm births.) But it’s racist to let women know such hateful medical facts!

How is it that invoking other negative health disparities somehow makes abortion a non-issue? In 2011 (latest year for Guttmacher abortion stats), with over 317,547 deliberate abortive deaths of black babies, destroyed by an industry that disproportionately profits from their demise, no other cause of death even comes close. All other causes of death combined among black Americans amounted to 286,797 in 2011. Abortion is the number one killer in the black community.

Oh, but racism, racism, racism. Look at the Flint water crisis, Hoover writes distractingly. Funny how racism is everywhere except in the one industry that kills, daily, for a living. You know, I felt that I was one of only a few who was in an uproar in 2012 when the Detroit News Opinion Editor, Nolan Finley, proposed the vile eugenic approach of taking out fluoride in Michigan’s drinking water and putting in contraceptives to “reduce crime” and “unwed births”. His article (now-removed and only available in the internet archive) was entitled: “Michigan is Breeding Poverty”. This is forcible sterilization, people. The NAACP didn’t protest. There wasn’t a peep from the pro-abortion, “pro-choice” side. Only silence. In fact, the Detroit branch of the NAACP included Mr. Finley in a forum discussion two years later to talk about the “work to be done to create a better community.” Apparently, that includes less black babies, which makes sense considering the NAACP’s radical support of abortion.

It’s more than abundantly clear that so-called #BlackLivesMatter activists and the multi-million dollar organizations funding the movement aren’t really concerned about the racial justice and the brutality that ends the majority of black lives. These passionate, but confused, advocates seem incapable of realizing that their voice was only made possible by being born…by the strength and courage of their own mothers who did not allow violence to take away yet another unarmed black life. 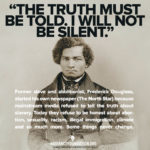