There’s a lot of talk about Chick-fil-A. Most of it is generated by the #fakenews establishment that wants nothing more than to demonize an organization that, historically, has publicly professed its Christian faith that is inseparable from its business practices.

“[We are] based on biblical principles, asking God and pleading with God to give us wisdom on decisions we make about people and the programs and partnerships we have. And He has blessed us.”

Those were the words of Chick-fil-A’s CEO, Dan Cathy, to the Baptist Press back in 2012 as he confirmed his biblical belief that marriage is between one man and one woman.

Days later, a disgruntled activist violently took out his disagreement with Chick-fil-A by trying to kill as many people as possible inside of Family Research Council’s (FRC) DC headquarters. According to the FBI interrogation, Floyd Lee Corkins chose FRC as a target because “Southern Poverty Law [Center] lists anti-gay groups. I found them online.” So, Corkins stormed inside FRC’s building, armed with a backpack full of Chick-fil-A sandwiches and 50 rounds of ammunition to “kill as many as possible and smear the Chick-Fil-A sandwiches in victims’ faces, and kill the guard.”

His heinous attack was stopped by FRC’s security guard, Leo Johnson—a hero who was shot while stopping the terrorist attack. In 2012, Corkins was sentenced to prison for 25 years. In 2017 Chick-fil-A donated money to the same corrupt SPLC that still outrageously lists FRC as a “hate group.”

The Chick-fil-A Foundation’s recent announcement about its future funding again reaffirmed its redirection and capitulation. It just so happens that the same three groups targeted for years by LGBT organizations as anti-LGBT “hate groups” just happened to be the same ones that would no longer be funded: The Salvation Army, Paul Anderson Youth Home and Fellowship of Christian Athletes. Chick-fil-A’s press release acknowledges that these groups were “characterized as anti-LGBT groups” but never dispels that. They give excuses, basically, as to why they had funded these three remarkable organizations but would no longer.

For those defending Chick-fil-A and pretending we haven’t witnessed their progression of capitulation, the Salvation Army sees it for what it is, stating in a press release: “We’re saddened to learn that a corporate partner has felt it necessary to divert funding to other hunger, education and homelessness organizations.” The Salvation Army does all three on a massive scale. But they don’t espouse an LGBT ideology.

In explaining Chick-fil-A’s funding decisions, Rodney Bullard, VP of Corporate Responsibility and Executive Director of the Chick-fil-A Foundation said: “We don’t want our intent and our work to be encumbered by someone else’s politics or cultural war. If something gets in the way of our mission, that is something that we are mindful of and cognizant of.”

Has their mission drifted way to the Left? Out with organizations that do not espouse a pro-homosexuality ideology and in with those who do, like Covenant House. Don’t let the Catholic association fool you, though. Covenant House, a homeless shelter for youth, takes pride in its promotion of all things LGBTQ. They even marched in the New York “Gay Pride” parade to show their inclusivity cred. Guess the Salvation Army (which admittedly has an issue with partially supporting abortion in cases of rape, incest and “life and health” of the mother) should’ve flown some co-opted rainbow colors to keep their hundreds of thousands in funding. Whoops. Looks like Covenant is the new Salvation.

Chick-fil-A also funds the DC-based New Leadership Council that identifies as a “hub of progressive millennial thought leadership” which exists to “support one another along their individual path to a more progressive political and cultural landscape.”

Chick-fil-A has given a sizable donation ($50k) to The Pace Center for Girls, yet another pro-abortion organization. The education and advocacy group will feature radical pro-abortion feminist Gloria Steinem (the “I Had An Abortion” activist who declared that birthing children is the “fundamental cause of climate change”) as their keynote speaker for their upcoming girls’ Summit.

Or, how about Usher’s New Look, R&B star Usher Raymond IV’s liberal non-profit? The group’s Disruptivator Summit is all about progressive community organizing on pivotal social issues, and Chick-fil-A funds it ($38,700 in 2017).

Chick-fil-A also gives tens of thousands to Chris 180 ($27,500 in 2017, $25k in 2019), a pro-LGBT behavioral health and child welfare service agency. The organization boasts of being awarded the “Leader in Supporting and Serving LGBT Families and Youth from the Human Rights Campaign Foundation (HRC).” Nothing promotes human degradation quite like the pro-abortion HRC—the multi-million dollar LGBT powerhouse that recently pushed for the legalization of prostitution in DC.

You can always love and serve the broken without affirming the brokenness.

And then there’s Junior Achievement (JA), which inarguably does some phenomenal work with education and entrepreneurship. They’re the recipients of hundreds of thousands a year from Chick-fil-A. In 2016, though, JA joined a coalition (Georgia Prospers) of pro-LGBT businesses in their “Too Busy to Hate” campaign to politically oppose religious liberty legislation (specifically the First Amendment Defense Act) from passing in Georgia.

So much for “not being encumbered by someone else’s politics or cultural war.” These groups, and many more funded by Chick-fil-A, are clearly political and liberal. Of course Chick-fil-A funds a lot of great initiatives, but they’re being publicly dishonest about their corporate evolution. And the millions of families who’ve supported them over the years, because of the fast food chain’s principled stand, deserve to know the COWardice that the company has shown in the face of “progressive” activism.

Ryan Scott Bomberger
Ryan Bomberger is the Chief Creative Officer and co-founder of The Radiance Foundation. He is happily married to his best friend, Bethany, who is the Executive Director of Radiance. They are adoptive parents with four awesome kiddos. Ryan is an Emmy Award-winning creative professional, factivist, international public speaker and author of NOT EQUAL: CIVIL RIGHTS GONE WRONG. He loves illuminating that every human life has purpose.
Recommended Posts
Showing 6 comments
pingbacks / trackbacks 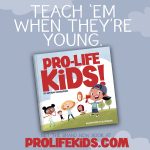 The new children’s book that should be in every home, every library and every churchAbortion, Adoption, civil rights, faith, Family, news, planned parenthood, racism